London, UK, 5th June 2022, ZEXPRWIRE, “Let Me Take You by the Hand and Lead you Through the Streets of London” goes the 1970s hit song by Ralph McTell.

Now, let us take you by hand and lead you through the glitz and glam of the history of London’s Nightlife.

Never-ending, intertwined avenues of Gothic and old Roman splendour carry a vibrant and stimulating culture. A magical city of passions and character. The skies above London are grey – everything else shines with bold, beaming, and electric colours. London, otherwise known as the “Big Smoke” has a rich and multicultural history that spans 2,000 years, which has contributed to the city’s cosmopolitan and exotic character. The cultural vibrancy of London places it as the most international of cities and makes it one of the most popular tourist destinations globally.

Wherever you are on the map, you’ll find the city teeming with free-spirited individuals, with larger-than-life imagination – adventurous to the point of hedonism. London is the shining “crown jewel” in the areas of innovative theatre, visual culture, pioneering music, ground-breaking writing, poetry, architecture, design, and culinary innovation.

London has it all. It is the “city of ideas” and the “city of dreams”, an innovator in the fields of heritage, arts, culture, literature, and music. Home to the “greatest of the greatest”, Charlie Chaplin, Virginia Woolf, Elton John, Alfred Hitchcock the “king of movies”, and Ryan Bishti, his majesty, “the King of the Party” – you name it, London has it, and makes it fun too!

Let’s dive straight into the fun…

From Dusk till Dawn – How London has Never Stopped Partying

After two years of lockdown, we can definitely say it – On London life, how we’ve missed you!

We have missed everything, the overzealous bouncers with their high-visibility jackets standing straight at the club’s entrance, the larcenously pricey cocktails on Sloane Square, the beaming lights of Regent street, the vivid and festive colours of Carnaby Street, the everlasting evenings along the gaudy, graffiti-clad canals of Hackney – It is great to have you back, London!

And that is why we have decided to bring it all back, in words and pictures, through this account of London’s night partying scene through the ages – We have what it takes to party like it was the 1920s. Let’s make these the Roaring 20s – 2020s.

The nightlife in London is both reactionary and visionary, luxurious and diverse, thrilling and brilliant. London clubs have been a cultural force that has distinguished Britain’s vibrant and ever-changing party scene for decades. These clubs have been at the forefront of each generation’s most innovative music, culture, and fashion scene.

Mark Birley named Annabel’s in Soho after his wife at the time, Lady Annabel Vane-Tempest-Stewart. It was envisioned as a piano bar for high-society people to sip at before going to gamble their night (and capital) away in the upstairs rooms. Birley was scrupulous, shrewd, and rich, which helped Annabel’s strive and quickly become the “place to be” in the 1960s and 1970s. Birley’s fame remains today, even though Annabel’s is now owned by fashion entrepreneur Richard Caring.

Annabel’s has drawn to its eclectic, gilded rooms some of the biggest names in the galaxy of stardom, Frank Sinatra, Kate Moss, Jack Nicholson, Elizabeth Taylor, and Princess Diana.

The couple renovated The Chaguaramas Club in London’s Covent Garden area and turned it into the Roxy in 1970. This was the 70s’ most prominent (and fun) punk venue. Siouxsie and the Banshees, Generation X, Chrissie Hynde, and The Clash were all frequents in the club.

Melbourne-born, London-based designer Leigh Bowery founded his Taboo nightclub in 1985. Taboo was the location for extreme fashion, gender fluidity, and personality expression. Taboo’s dress code was “Dress like your life depends on it, or don’t even bother” Bowery’s styles ignited the parties and his appearance was always the main spectacle.

Laurence Malice founded Trade in Clerkenwell Road in 1990. The club was the first 24-hour club in the UK as well as being the pioneering gay scene.

Trade’s opening hours were supposed to attract guys to attend the club instead of cruising in the parks after parties. Tony De Vit and other prominent DJs popularised hard house at the club. Stars like Rupert Everett, Kate Moss, and Alexander McQueen would often be seen partying the night away at Malice’s club.

The UK’s longest-running rave. Eastman pioneered jungle, which then transformed into grime and dubstep. Grime artists including Dizzee, Wiley, and Riko have identified Kool FM as an inspiration – the pirate radio station developed by Eastman.

Dance Tunnel’s is definitely one of the main centres of London’s nightlife and its jet-engine soundsystem makes it the greatest of Dalston’s basement clubs. The club boasts some of the world’s greatest new house, techno, and other dance music.

But Who “Owns” the Party Now? 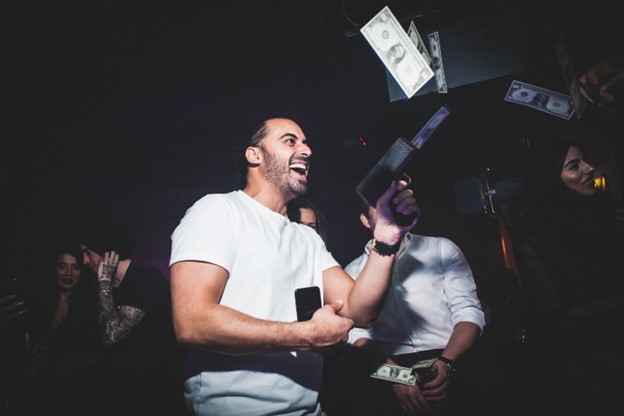 Ryan Bishti, otherwise known as “the King of London’s Roaring 2020s” or “the King of Nightlife” is the man behind the vision.

Cirque Le Soir, part of the cream-group, is the nightclub of eternity in the streets of dreams. The eclectic, yet warm decor makes us all dream about times past while its modern vision encapsulates perfectly the city that hosts it. Young, vibrant, fun, yet classy and dazzling. Just like its owner – club promoter turned business mogul, Ryan Bishti.

Cirque Le Soir first opened its doors to the public in 2009 and has since gained a reputation that is celebrated and admired all over the world attracting the biggest names in the show-business, from Rihanna and Cara Delevigne to Kanye West and the Kardashian “Klan”.

Cirque Le Soir was one of the first-ever locations in London to offer a truly spell-binding atmosphere and a night to remember. It was also one of the first places that managed to seamlessly incorporate live entertainment into its nightly offering, which enchanted both the city and its clients.